Social enterprise – a recognised partner in the economy

The 2015 Scottish Social Enterprise Census was undertaken as a collaborative project between a group of agencies with a shared interest in promoting social enterprise in Scotland.

Key goals of the project included identifying the number of social enterprises, building a comprehensive understanding of their activity, assessing their contribution and undertaking a financial review of the sector.

Scotland has long been recognised as a world leader in socially-progressive business structures with over 40% of its social enterprises having been established in the past ten years. During this time, the sector has been embraced by the Scottish Government as an important partner in the economy, in civic society and as a provider of public services.

The findings in the census and report are a testament to the success of a sector that features:

The census and report clearly highlight the benefits of social enterprise in action while recognising the maturity of the sector and a growing sense of coherence among its key stakeholders. 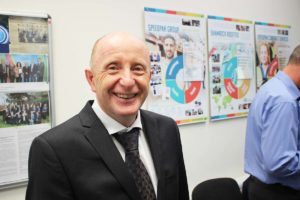 Gerry Higgins, CEO of Community Enterprises in Scotland [CEIS] – one of the 2015 Census project partners – visiting Speedpak in September 2017

Evidence from the report is now being used by partners to shape an agreed vision for guiding the development of the social enterprise sector and to ensure that the conditions exist for social enterprises to continue to flourish in Scotland.

Beautifully designed, easy to read and available to view and/or download from the Social Enterprise in Scotland website in PDF format [2MB], this is an inspiring document full of interesting and valuable information.

This website uses cookies to improve your experience while you navigate through the website. Out of these, the cookies that are categorized as necessary are stored on your browser as they are essential for the working of basic functionalities of the website. We also use third-party cookies that help us analyze and understand how you use this website. These cookies will be stored in your browser only with your consent. You also have the option to opt-out of these cookies. But opting out of some of these cookies may affect your browsing experience.
Necessary Always Enabled
Necessary cookies are absolutely essential for the website to function properly. This category only includes cookies that ensures basic functionalities and security features of the website. These cookies do not store any personal information.
Non-necessary
Any cookies that may not be particularly necessary for the website to function and is used specifically to collect user personal data via analytics, ads, other embedded contents are termed as non-necessary cookies. It is mandatory to procure user consent prior to running these cookies on your website.
SAVE & ACCEPT